Symposium on the 10th Anniversary of the JFBA Visiting Scholar Program

On April 1, 2008 in Tokyo, Japan, the Japan Federation of Bar Association (JFBA) hosted a symposium to celebrate the 10th anniversary of “the JFBA Visiting Scholar Program” established in 1997 first with the New York University (NYU) School of Law and later with two other law schools in the United States.

Through this Program, committed Japanese public interest lawyers recommended by the JFBA have been accepted as visiting scholars at NYU School of Law since 1998 and at the University of California at Berkeley (UCB) School of Law since 2000. There have been 18 JFBA visiting scholars as of the 2007 academic year. The JFBA also entered into an agreement with the University of Illinois College of Law for this Program in 2007.

Featured guests from NYU School of Law for this symposium were Professor Frank Upham, who played a key role in setting up this program, and Associate Professor Katrina Wyman, a prominent scholar of environmental law and keynote speaker of this symposium. 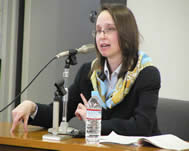 Prof. Wyman delivered a keynote speech titled “U.S. Climate Change Litigation.” She categorized recent climate change litigation into three types and discussed a typical court case for each category. The three types are: (i) NGOs and states sue the federal government for not regulating greenhouse gas emissions under the Clean Air Act (A1) or for not considering climate impacts under environmental impact assessment laws such as the federal National Environment Policy Act (A2); (ii) States and NGOs sue large polluters for damages or emission reductions (B); and (iii) States and NGOs defend a State’s right to regulate greenhouse gas emissions (C). One of the leading cases of Type A1 introduced by Prof. Wyman was the Supreme Court case “Massachusetts. et al. v. EPA.” In this litigation, environmental NGOs, as co-plaintiffs, played major roles by collaborating with and providing their staff time and resources to the State governments. Prof. Wyman’s description of this case fascinated the Japanese audience. Prof. Wyman stressed, however, that environmental NGOs use litigation as a “side show,” while putting more emphasis on lobbying activities. Consequently, they have achieved a certain level of real influence on the legislative process.

Ms. Satomi Ushijima, JFBA visiting scholar at NYU in 2000, shared her observation that the “Private Attorney General Theory” in the U.S. has enabled environmental NGOs to become actively involved in public interest litigation. She also presented her own experience in the U.S. In the U.S., information on lead-based paint in homes constructed before 1978 must be disclosed by landlords to tenants before entering into a lease. Having learned about this regulation, Ms. Ushijima complained to her landlord that she had received such information one week after her contract was signed. Surprisingly, the landlord immediately agreed to return all the paid rent, but she later learned that the court would have awarded even court costs and reasonable attorney fees if she had commenced a civil action.

Mr. Takaaki Kagohashi, a distinguished environmental lawyer in Japan, commented that the time has come for Japanese NGOs to become involved in the legislative process in a more specialized, organized and strategic manner. 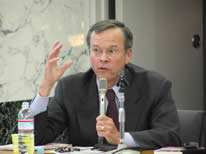 Ms. Yoiko Ando, a member of the JFBA Committee on International Human Rights, delivered opening remarks. Ms. Ando studied at the NYU School of Law as a visiting scholar in 1995 before the establishment of the JFBA Visiting Scholar Program. Having recognized the need for institutional arrangements for public interest lawyers in Japan who desire to study abroad, she spent the first year after returning to Japan to set up the Visiting Scholar Program between the JFBA and NYU School of Law. She first expressed her gratitude to Mr. John Sexton, the current President of NYU and Dean of NYU School of Law at the time, for having accepted her as a visiting scholar at NYU. Then Ms. Ando emphasized that this Program could have never been realized without the generous support of NYU School of Law and, in particular, special tribute should be paid to the efforts of Prof. Upham, her mentor at NYU. She concluded by saying, “I believe that this Program has made it much easier for Japanese public interest lawyers to study abroad. I am grateful to learn that this Program has continued for the last ten years to give public interest lawyers opportunities to study in the U.S. I hope further development of the Program has a beneficial effect, both to the JFBA and the partner law schools.”

Ms. Kazuko Ito stated that she was very much inspired by her fellow participants of the “Global Public Interest Lawyering Program” directed by Prof. Frank Upham and Prof. Holly Maguigun. She stressed that, “Public interest lawyers from developing countries convinced me that Japanese lawyers should be aware of and fulfill their roles in promoting human rights abroad as well as within our own country. This conviction led me to set up the new international human rights NGO, Human Rights Now, in Japan.” She also noted that when she introduced the Japanese public interest lawyers’ practice at NYU, in which lawyers do not financially rely on rich NGOs nor foundations but devoted their time on a voluntary basis without compensation, her colleagues from other countries were very surprised and impressed. She said this experience helped her recognize the unique nature and strength of the Japanese model.

Ms. Masako Mori thanked Prof. Upham saying, “When I first visited him at NYU, he kindly told me that it was also important to get out of law school and find out how law works in society.” With this advice, she visited the Consumer Protection Bureau of the Federal Trade Commission (FTC) and learned how the FTC can obtain a court order for consumer redress on behalf of damaged consumers. After her return to Japan, she worked as a government official at the Financial Service Agency and then was elected as a Diet member. She said, “What I learned at NYU and the networks I established through this Program has helped me a lot in my new career.” Explaining that Prime Minister Yasuo Fukuda recently announced his plan to establish a new “Consumer Agency,” which she had been advocating for since her visit to the FTC, Ms. Mori concluded by saying, “I should say that this path started when I first visited Prof. Upham in his office at NYU.” Prof. Upham responded, “I should be given credit by Japanese people for the establishment of the Consumer Agency, if it is achieved!” 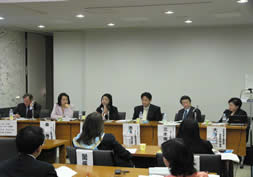 Mr. Tomoki Ikenaga discussed the history of the U.S. juvenile justice system, which he studied at UCB. Mr. Ikenaga explained that it originally started with the “single structure” (criminal sentencing), moved to the second phase of “dual structure” (criminal sentencing and protective sentencing) in certain cases, and now, the third structure “blended sentencing” is currently being considered. Through studying such development, he was impressed by the dynamism of American society which has repeatedly used the “trial and error” method to advance. He also pointed out that although U.S. public interest lawyers were powerful and professional with financial support from the government, foundations and wealthy individuals, he realized that access to legal services for the poor was still insufficient. He stressed, therefore, that “I think we should choose what we should learn and should not learn from the U.S. only after considering its whole social structure that has both positive and negative sides. We should develop an attitude to always examine matters from multiple viewpoints. This is one of the valuable lessons I have learned through this Program.”

Prof. Upham first expressed his appreciation for the JFBA by saying that it was very beneficial for NYU to have JFBA fellows who were experienced public interest lawyers. He also made the point that Japan is one of the leading countries in the world regarding public interest law and practice. In his remarks, Prof. Upham said “Although Japan has such a unique and powerful non-Western public interest lawyering model, which may be easier for lawyers in other countries to follow than the U.S. model, this model is invisible from other countries.” In this regard, he concluded that one of the roles that the JFBA fellows of this Program are expected to play was to introduce this Japanese model to the rest of the world. Prof. Upham also addressed the audience and said, “If you come to study abroad, please get out of school or you will miss things which can be learned only from society. To study abroad as a mature adult with certain career has an advantage since you can share with other students your experiences as a professional practitioner.”

There was a proposal from the floor that the JFBA should report to the partner law schools the successful outcome of this Program.

The JFBA closed the symposium with deep appreciation to Prof. Frank Upham and Prof. Katrina Wyman for their participation. The JFBA hopes to maintain its close relationship with NYU School of Law through this successful Visiting Scholar Program for a long time to come.