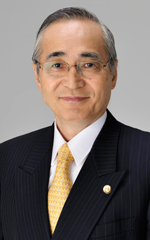 Best wishes to all of you for the New Year!

It has been said that the situation surrounding justice is currently in a transitional state.  I have been striving with a strong determination to fulfill my duties as the President of the JFBA.  Throughout the year, I constantly felt the burden of all the issues placed on my shoulders.

With reference to the special secrets bill, the bill was rammed through parliament with very little time for deliberations.  The bill contains various problems, such as the fact that it may lead to a violation of the people’s right to know and the freedom of the press, which form the basis of our democratic society.  The JFBA will continue its activities this year with the aim of bringing about a drastic review of the bill, possibly including its abolition.

In relation to the Great East Japan Earthquake and the subsequent Fukushima No.1 Nuclear Accident, after which almost three years have gone by, the JFBA has been exerting its all-out efforts to provide support to the disaster victims and other people affected, as well as assisting in the recovery and reconstruction of disaster-stricken areas.  In particular, with reference to the statute of limitation for victims of the nuclear accident to seek compensatory damages, the JFBA strove to achieve the legislation of a law which lengthens the period during which such victims can claim compensation, and managed to legislate it within 2013.  The JFBA will continue to make every effort to ensure that all victims will be able to receive prompt and appropriate compensation, and also sufficient support for rebuilding their lives and for the maintenance and recovery of their health.

Moreover, the year 2013 marked a fruitful year for the JFBA as it achieved some significant breakthroughs in various issues which the JFBA has long been tackling, such as: i) the enactment of a law regarding the elimination of discrimination due to disabilities; ii) the enactment of a law, the so-called Menda bill, which provides assistance to former death-row inmates who have been acquitted at a retrial and who are not eligible to receive a pension; iii) the amendment of the Public Offices Election Act relating to the right to vote for adults assisted by guardians; and iv) the realization of a system that stipulates the procedure for class-action lawsuits with the aim of helping consumers recover financial damages.

Further, a number of important judgments were rendered last year, namely, the Supreme Court’s ruling that a Civil Code clause granting a lower level of inheritance to children born out of wedlock compared to siblings born in wedlock was unconstitutional, and rulings in relation to the unconstitutional disparity in the value of votes between populous and less populous constituencies. As such, it can also be said there were some clashes between the judiciary and legislature during the last year.  Though the Civil Code provision concerning inheritance rights of heirs born out of wedlock was revised, the proposed revision of the Census Registration Act in which the identification of children born outside marriage is required on the birth registration form has not yet been realized.  With reference to the lawsuit regarding the disparities in the value of votes among different constituencies, the Supreme Court ruled that the 2012 Lower House general election was in a state of unconstitutionality, but it did not void the final results thereof. Together with the following rulings made by various high courts that the outcome of the July Upper House election should be invalidated, the role of justice will no doubt continue to attract attention.

Regarding the challenges to be faced, including the reform of the criminal justice system, centered on the promotion of transparent interrogations, as well as the reform of the system for fostering legal professionals, which involves a number of issues, namely: i) the reform of law schools, such as the review on the structure of law schools, including the consolidation and elimination thereof, and the need to secure a high level of quality in such education; ii) enhancement of the legal apprentice training course; iii) issues related to the number of legal professionals; and iv) providing financial support for legal apprentices, in order to bring about specific and substantive outcomes, the JFBA will certainly use its best efforts to deal with these and other policy challenges.

The JFBA will also continue to enhance its OJT and training as well as its support for the practice of attorneys in order to better enable attorneys to fulfill their roles effectively, and will take strong measures to eradicate attorney misconduct.

As I am determined to make every effort to fulfill my duties and responsibilities as the President of the JFBA, during the three months remaining in my term, I humbly request your continued support and cooperation in our activities for this coming year.

I would like to take this opportunity to wish you all a successful and prosperous year ahead.


By Kenji Yamagishi, the JFBA President