The Third Japan-Korea Bar Leaders Conference was held in Gyeongju, the beautiful, ancient capital of Korea. It is an international conference with a very long history, the predecessor of which was the annual exchange conferences hosted alternately by Japan and Korea which had been held since 1987, and it was the third year since the conference developed into the formwhere the bar leaders from Japan and Korea get together. This time, 47 participants, which include the JFBA leadership and representatives of bar associations across Japan, visited Korea, and a total of more than 100 people participated in the Conference from Japan and Korea. 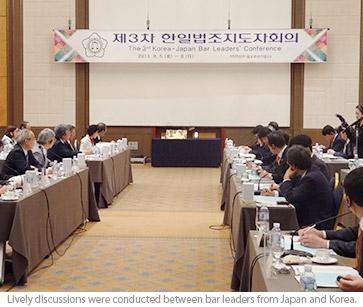 In Session 1, entitled, “The System of Cultivating Legal Professionals (the Law School System) and the Expansion of the Scope of Legal Practice for Lawyers,” the contents and current status of the systems in Japan and Korea were reported respectively. Later, discussions were carried out, focusing on issues faced by both organizations which have been caused in line with the rapid increase in the number of lawyers. In particular, with reference to the preliminary examination system which has already been implemented in Japan, there was a heated discussion as to the purpose of and issues relating to such examination, and so forth.

Session 3, entitled, “System of Mandatory Representation of an Attorney in Civil Cases and Appointment System of Judges by Experienced Lawyers and Prosecutors” provided an excellent opportunity for Japan to learn the discussion in Korea, which is currently going ahead of Japan in relation to this issue.

In each session, a great many questions and answers were actively exchanged within the limited time period provided. All of the sessions were highly productive and fruitful because there was a strong positive atmosphere in which the participants from both countries, faced with similar problems, have attempted to improve the quality of their respective legal cultures through the active exchange of their opinions in an open and candid manner. Stimulated by the highly motivated Korean lawyers, the participants from Japan could further deepen the amicable relationship between Japanese and Korean lawyers, which resulted in the participants a very meaningful and fruitful three-day conference.