The Three-Bar Meeting, which has been held every year since 2005 as a place for exchanging experiences among the Japan Federation of Bar Associations (JFBA), the Council of Bars and Law Societies of Europe (CCBE), and the All China Lawyers Association (ACLA), was held in Athens, Greece, and opinions were exchanged focusing on the three main themes of: “1) Independence of Lawyers”; “2) Problems in Cross-border Practice”; and “3) Problem Areas, in Regulation of Lawyers (Ownership of Law Firms by Non-Lawyers) (ABS) .” 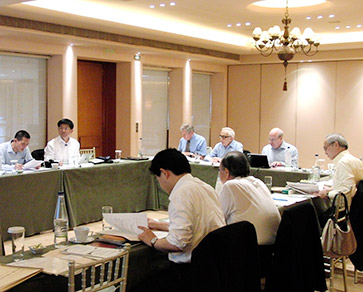 In terms of the theme entitled “Independence of Lawyers,” the JFBA introduced the process it has undergone in successfully achieving the independence of lawyers across Japan, a right which the lawyers in Japan have been firmly and successfully protecting since the end of WWII, after having gone through the pre-war systems under which self-governance had not been granted. The ACLA reported recent legal activities which it has been engaging in, namely, the development of rules and guidelines for lawyers, the establishment of a disciplinary system and others. In their report, the CCBE informed the participants of the status and the problems of the gatekeeper system (a system which imposes a duty on lawyers to make reports to the applicable government authorities regarding “suspicious transactions,” with the aim of regulating money laundering, etc.) in Europe. Unlike in Japan, the gatekeeper system has been applied to lawyers in Europe although it entails certain problems, such as the independence of lawyers from state power, and a conflict with the confidentiality obligations held by lawyers towards their clients. However, since the time when a decision was made in 2012 by the European Court of Human Rights (ECHR), the trend has changed and now the EU is in the process of drafting a new directive to introduce a filtering system, in which any reporting to the applicable government authorities is to be conducted according to the judgment of bar associations.

Next, in relation to the theme entitled, “Problems in Cross-border Practice,” it was reported from the ACLA that there are currently 263 foreign law firms that have set up representative offices in China, and the Chinese government is planning to speed up the processes required for the establishment of such representative offices, as well as to tighten the regulations surrounding this area. As for Chinese law offices going overseas, it was explained that over 30 Chinese law firms had set up a total of 54 branches overseas.

In reference to the theme of the ABS, it was reported that the individual EU member states can decide whether or not they will introduce either type of ABS, i.e. ABSs for investment or ABSs for participation. In addition, in the event of a request being made by a lawyer who belongs to a firm adopting an ABS-type structure for setting up a branch office in an EU member state which does not approve of ABS-type structures, such request can be rejected pursuant to the Lawyers’ Establishment Directive

Since all of the themes involve important issues regarding which each participating country and area’s responses will have a mutual impact on each other, the significance and vital importance of collecting information in a continuous manner and exchanging opinions were reconfirmed at this meeting.