HOME > News Release > POLA (The Conference of the Presidents of Law Associations in Asia) held in Tokyo on June 10-12, 2013 - More Powerful Linkage of Lawyers in Our Region

POLA (The Conference of the Presidents of Law Associations in Asia) held in Tokyo on June 10-12, 2013 - More Powerful Linkage of Lawyers in Our Region

The 24th Conference of the Presidents of Law Associations in Asia (POLA) was held hosted by the Japan Federation of Bar Associations (JFBA). A total of 60 leaders from 19 overseas organizations, including bar associations and international law societies from across the Asia-Pacific Region attended. 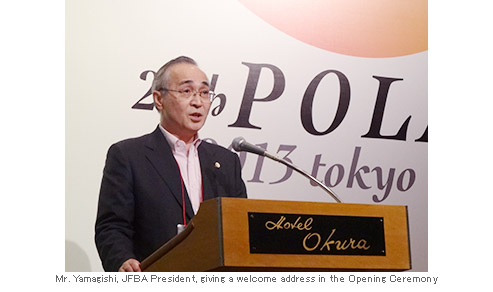 The POLA Conference was launched in 1990 in response to a joint-call from the JFBA and the Korean Bar Association (KBA), and member countries take turns hosting the annual POLA conference. This year, the JFBA hosted the Conference for the third time, following 1990 and 1999.

In the Opening Ceremony, a welcome address was given by the JFBA President, Mr. Kenji Yamagishi, and also by Supreme Court Justice, Mr. Masaharu Ohashi, followed by a keynote address delivered by Mr. Takehiko Nakao, President of the Asian Development Bank. At the subsequent Reception (Welcome Cocktails), Mr. Sadakazu Tanigaki, the Minister of Justice, also gave a welcome speech. All of the above speakers put a stress, from each speakers’ perspective, on the importance of establishing the Rule of Law in the Asia-Pacific region at respective speech.

On the second day, panel discussions were conducted on two themes: “Information Sharing and Collaboration on Public Interest Activities of Bars and Law Societies in the Asian Pacific Region,” and “Environmental Pollution and Lawyers’ Activities.” At the Luncheon Talk entitled the “Role of Bar Associations for Disaster Relief,” the JFBA’s activities in aiding recovery from the Great East Japan Earthquake were introduced. In the afternoon, “Familiarization Visit to the Supreme Court” including a visit to the Chief Justice and a tour to the Grand Bench of the Supreme Court was conducted.

In the morning of the third day, an open session was held on the theme: “Facilitation of Cross-Border Business Activities of SMEs within Asia.” After the Closing Ceremony, a visit to the Tokyo Immigration Bureau was conducted, followed by a visit to Tokyo Skytree. In addition to these events, the Presidents’ Meeting, in which only the president of each participating organization was able to attend, took place on the second and third days. At the end of such Meeting, the “Tokyo Declaration” was adopted by an initiative of the JFBA, in which mutual provision of information and cooperation for access to such information among the member organizations, etc. were reaffirmed.

At each of three sessions, the president (leader) of each bar association gave a presentation as a panelist, and the JFBA President, Mr. Yamagishi, gave a presentation entitled “Fighting against Pollution and Environmental Issues - the JFBA’s Experiences and A Message for Our Fellow Asian Lawyers” at Session 2: “Environmental Pollution and Lawyers’ Activities,” in which he introduced the activities and experiences of Japanese lawyers and the JFBA, focusing on four major pollution disease lawsuits, and made an appeal on the necessity of cooperation and solidarity among Asian lawyers towards advancing environmental protection. The presentation was received with enthusiasm by the participating presidents. It was a moment when we could each confirm the fact that the public interests of lawyers are shared across national borders. In addition, many presidents who use English as a second official language expressed their respects for Mr. Yamagishi’s preparation for the speech, which was given in English. It acted as a reminder that language barriers are common issue shared among Asian lawyers.